“Stay calm and have faith” – The chemist among Alsacian wine makers

Domaine Ansen is a small wine estate in the village of Westhoffen, Alsace, just a short drive away from Straßbourg. It was established in 2012 by Daniel Ansen. Daniel owns 8 ha of vineyards spread over the wine hills in and around Westhoffen, which he works organically. This means he doesn’t use any chemical additives to make his wine nor does he spray his vineyards with chemicals. He grows all of the varieties that are permitted to be produced into Alsacian wine, with Riesling being his major variety. He produces mostly white wines, Pinot Noir and also Crémant d’Alsace.

Daniel and I are driving back from Colmar, the wine capital of Alsace, where he had wine business to do. He is driving the car, his daughter is sleeping in the back of the car while I’m sitting in the passenger seat enjoying the view of the Vosges mountains. The peacefulness and tranquility of the situation encourage me to ask Daniel for an interview. He kindly agrees. So, lean back and enjoy reading the following interview! END_OF_DOCUMENT_TOKEN_TO_BE_REPLACED 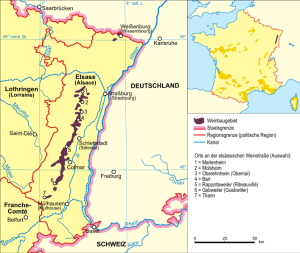 In most parts of France, wines are always named after the regions they come from. What does this mean, exactly? You have probably heard about a Bordeaux, a Médoc or a Chablis wine. Well, these wines are all named after the regions they come from and not after the grapes these wines are made of. So, a Bordeaux usually exists of different grape varieties, such as Merlot, Cabernet Sauvignon and Cabernet Franc. A Chablis, a region in northern Burgundy, is usually a white wine made out of the Chardonnay grape. The same system, by the way, applies to Italy and Spain.

But in Alsace, it’s the grape, baby!

However, in the wine region Alsace we don’t encounter what is typical for the rest of France. Here, wines are named after the grape varieties they are made of. This little odditiy can be explained through the closeness to Germany, where wines are typically named after their grape variety and not the region. END_OF_DOCUMENT_TOKEN_TO_BE_REPLACED

Finally: wine around the globe is starting. I am on my way! Full of excitement and nervousness, I am sitting on the train that takes me from Mainz to Mannheim and then on to Straßbourg, from where I will catch a bus to Westhoffen, Northern Alsace, France. The first stop on my wine around the globe tour. 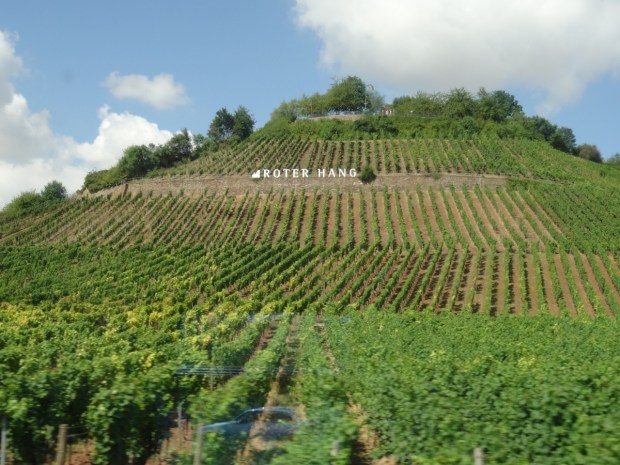 The site Roter Hang in Nierstein.

The train moves between the river Rhein and Rheinhessen’s wine hills, passing one of the most prestigous wine growing areas, The Roter Hang in the village of Nierstein, before fully emerging into the hearf of Rheinhessen. The sun is shining, I couldn’t have asked for a better start! END_OF_DOCUMENT_TOKEN_TO_BE_REPLACED